I am an Artist

The Journey of Life can become a winding road full of unexpected turns and encounters. In walking my own road I learned that trusting my intuition and Spirit is always the best way and that every new day is a reason to celebrate.

A New Beginning in Canada

In October 2010, my four children and I moved from Slovakia to Canada due to a series of tragic events. We settled in a small one-bedroom apartment in Toronto, which became my sanctuary for healing. However, after a year, I realized the apartment was too small and found a larger one in the same complex. 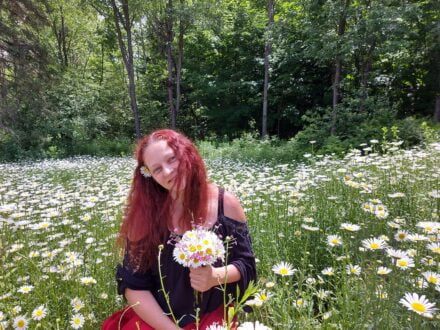 In the summer of 2013, I enrolled in college to study physiotherapy with the goal of finding a good-paying job to support my children. While I had a background as a professional dancer and dance teacher, I did not consider myself an artist at that time. In fact, the closest thing to art in my life were the doodles on the margins of my physiotherapy books.

One day, my daughter came home from a sidewalk chalk-drawing session and told me, “Mommy, the guy who moved into our old apartment is an artist. His name is Ritchie. He said I’m really good at art and if I want, I could do a painting!” Later that week, I met Ritchie at a local pizzeria and we talked for the first time. I was curious about his art, and he agreed to show it to me. 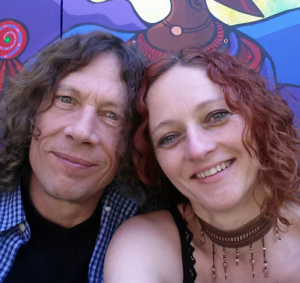 Walking into his studio I was absolutely speechless. Ritchie’s art took me back in time to my childhood when the world was a magical colorful dream, everything was simple and life made sense. The love vibrations woven into Ritchie’s paintings made me cry. I sat there in his studio, looking at his paintings, tears running down my face, enchanted.

The weeks that followed our first connection were pure magic. It felt like a dream and often I had to pinch myself to make sure I was awake. A seed of love was planted that we carefully watered and pampered, and instantly it grew into a beautiful flower. Our first touches and kisses wore the innocence of teenagers experiencing their first time in love. At times our hearts cried from the abundance of emotions.

Meanwhile, inspired by Ritchie’s art, I bought myself my first sketchbook and found the courage to start drawing on the frighteningly blank pages.

The Power of Love and Art 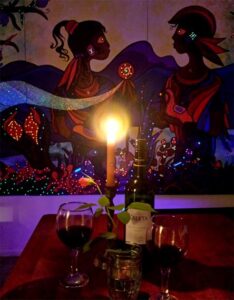 In August 2013 I painted my first, and to this day, smallest painting ever. I kept it secret from Ritchie yet when I showed him my creation he was so thrilled and supportive it encouraged me to start painting another one right away. Soon we were painting side by side in Ritchie’s studio, my old apartment, which once again provided sweet sanctuary.

A few months and paintings later Ritchie suggested that we should have a group art show in a local café. It felt unreal for me to even consider being in the same show with real artists since I certainly didn’t see myself as one.

In February 2014 we celebrated our first mutual show appropriately entitled, Inspired by Love. As our love continued to flourish, our paintings multiplied. The creation of our first collaborative mural, Lovescape, also marked the beginning of my own personal recognition of myself as an artist.

Later that year I finished my physiotherapy studies with excellent marks yet I never felt compelled to take the jobs that were offered to me. My amazing children supported me in my decision, and continue to do so, despite the financial challenges we face as a family. When asked about their Mom, they proudly say, “She’s an artist!”

Ritchie and I have been partners in love and art for three years now. Our love bubble includes and nourishes all those we love. We never fight since there is nothing we could possibly fight about. Around the neighborhood we are known as the barefoot lovers who share everything. We had a number of art shows, painted numerous collaborative murals, wrote a book, wrote an album full of songs and went on many canoe trips exploring Ontario’s Parks. We’ve shared more than a thousand days & nights of fairytale love, celebrating every sunrise and every starry night as a precious gift.

We are not in a hurry to find out about the riches of tomorrow since today is here to be loved to live. Our time in this world is so short. I want to spend the rest of my time wisely, in love and fruitful creation, reaching out to inspire others through art and love.