Dreaming of the Astral Plane 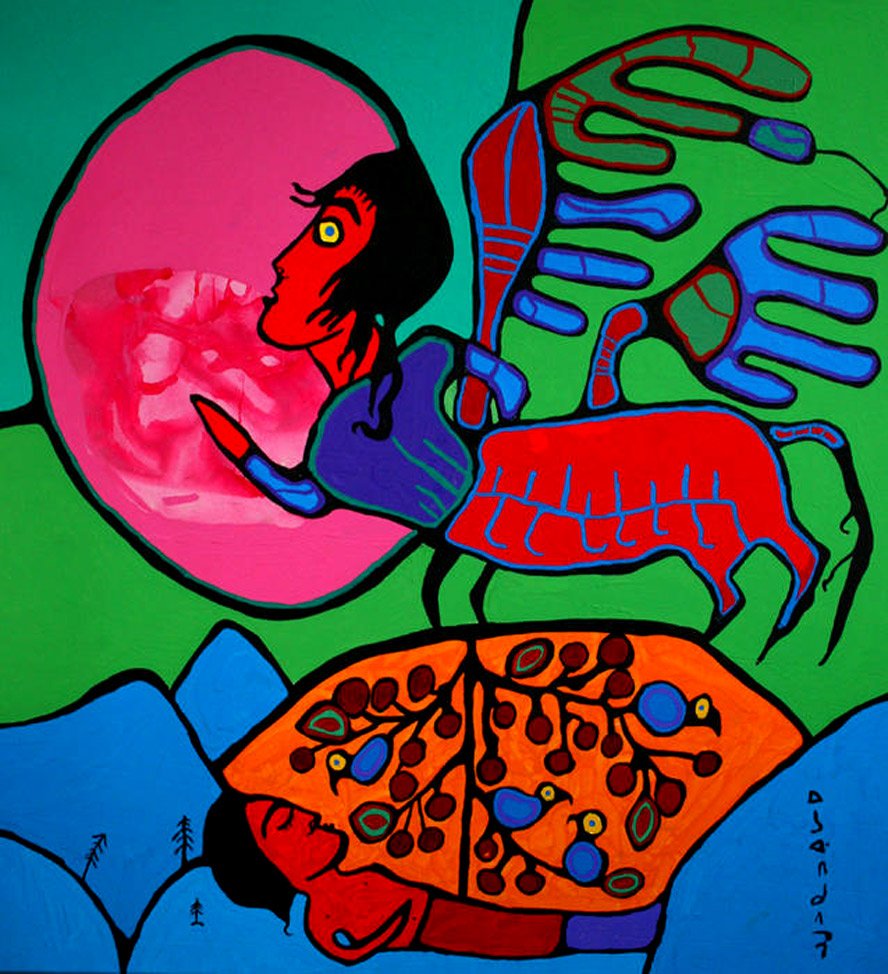 Dreaming of the Astral Plane

“No matter how much I have abused my physical body, I was always spiritually strong. And I still am. It’s as if someone somewhere is looking at me, saying, “Norval you’re going to make it! Get up there! But in the meantime here is something to look at!” Then this being would take me out to the Astral Plane…”

“Today, I seem to be getting more settled, getting to be the real Me. Not just Norval, nor the artist Morrisseau because now I know the real Me feels free. I used to talk about demi-gods, and the lesser and lower worlds. Then the worlds of my visions got higher and higher, and so did my paintings. What else can I do with the images? And then something else hits me; it’s like a burst of enlightenment or something. At times, for example, I can see far away an opening, and the river pouring out. But how can I paint it symbolically? I’ve yet to figure out how to put all that on canvas. You see, the next stage in my painting will be even more spiritual. Then I shall finally allow the colours to flow and flow, or just to be.”

An Interpretive Analysis of “Dreaming of the Astral Plane”

The late Norval Morrisseau’s legacy as master artist and grand shaman of the Anishinaabe bridges dimensions, ages, creeds and kinds. His devotion to the teachings of the Eck masters gave him leeway to explore shamanism beyond traditional teachings. The painting, Dreaming of the Astral Plane, speaks with a universal tongue that envisions shamanism as practical magic for the modern world.

Dreaming of the Astral Plane synthesizes universal myths into insight born of Morrisseau’s personal experience with ‘soul travel’. This later era painting along with its sister paintings including the National Gallery’s epic mural, Observations of the Astral World, 1995, and The Shaman’s Dream, 1995, (Travels to the House of Invention, Key Porter 1997) reveal the culminating revelation of Morrisseau’s unbridled exploration into shamanism.

Morrisseau first became famous depicting legendary Cree-Ojibwa stories of earthly dualities in conflict however in Dreaming of the Astral Plane we witness this dualism transformed; not into unity, but into multiple dimensions harmonized above, below and within. Long gone are the days of painting teeth, claws, and supernatural creatures in epic battle. Instead the viewer shares in the splendour and freedom of the lucid dream-state experienced by one who knows who they are, why they are here, and where they are going.

In Dreaming of the Astral Plane Morrisseau depicts himself peacefully asleep on a West-Coast mountain range blanketed in night blue. To connect the earthly with the dream world Morrisseau paints a sacred tree, abundant with life and bathed in the warmth of the sun. Above we witness him awakened in the dream-state and transformed into a hybrid Pegasus-Centaur. As the four-legged flying man-elk the shaman is imbued with vision to see the way, the power to make the leap through the portal, and wings to soar on to the higher causal dimensions of creative freedom that are accessible only to souls so empowered.

Ritchie 'Stardreamer' Sinclair has been exploring the arts, primarily painting, all his life. His artistic effort is both a personal approach to Spirit and ideally a source of inspiration to others. As a founding member of Norval Morrisseau’s Thunder­bird School, Ritchie is also an authorized teacher and proponent of the Shamanistic Arts. To view his recent work visit www.twinflamesart.com

Designer Clothing by Brona & Ritchie Artwear | Made in Canada

Type and press Enter to search